There is a question that has plagued humanity since humanity was in a position to be plagued, and a question that keeps chins continuously covered in little scratch marks: just why are there so many Bulgarians living to be 100 years old or more? Well, it turns out that this question needn’t plague humanity any longer, for it has actually already been answered.

The answer, my esteemed brethren, is yogurt. It’s that simple. I could probably just end this chapter here, and leave everyone safe in the knowledge that eating Bulgarian yogurt means you’ll live to be old and (assumedly) wise. Of course, this isn’t what is going to happen. Who discovered this fact? What led to the discovery? Can I bluff my way through more science? The answer to all of these questions is yes, although the actual word yes alone answers neither the first nor the second question and I’m most likely lying about the third.

The man in question was a young chap called Stamen Grigorov. Stamen was born on October 27, 1878 in a little village called Studen Izvor (90km or so from Sofia), which translates as ‘Cold Spring’ and thus sounds immensely inviting. Little is known about the childhood of the dude who would become Dr. Stamen Grigorov, but it is fair to assume he had one and that it happened. His parents? Let’s assume they existed. We know something about his schooling however, in that it was in Sofia that our hero went to high school before finding himself whisked away to Montpellier (France) to complete his secondary education. A budding physician and microbiologist, Grigorov then whisked himself off to Geneva (Switzerland), and it was here that all of his dreams would come true. I say this on the assumption that your everyday microbiologist dreams of this sort of stuff.

Under the tutelage of the esteemed Professor Léon Massol, Grigorov developed into an impressive student and microbiologist. It was a rather exciting time for microbiological discoveries and it wouldn’t take long before Grigorov had gotten himself on the microbiological map, should any such map exist. Around this time the Russian biologist Ilya Mechnikov published a paper on the subject of ageing, believing that it would (and should) be possible to cure humanity of getting old and wrinkly, and part of his research took him to Bulgaria to see the land famous for its high number of old codgers. Mechnikov discovered that the old timers in Bulgaria seemed to be eating yoghurt on a daily basis. Did this have something to do with their high number of years? The stars were about to align for our hero, the venerable Gospodin Grigorov.

That man Massol would provide the impetus, suggesting that Grigorov dedicate his studies to the microflora of Bulgarian yogurt (or kiselo mlyako, to give its native term). It is almost as if Massol knew exactly what was happening and was pushing his student towards this prize, but the prize wasn’t exactly nearby and it took Grigorov approximately bloody ages to hit gold. He eventually found a rod that caused the milk to curdle, a rod that wasn’t found naturally in the human intestinal tract. This rod somehow formed colonies in the intestines, and also happened to be the true cause of natural yoghurt. A name was needed of course, and a name was chosen. Step forward Lactobacillus bulgaricus bacillus. Scientists don’t really understand the art of catchy names.

Here’s a list of things I almost understand; Bulgarian yogurt is full to the brim with lactose, proteins and vitamins. The rod that Grigorov discovered can only be found in Bulgaria, as in other climates the bacteria degenerates and ceases to be a thing. The Bulgarian relationship with their yogurt goes all the way back to forever ago, or as far back as the Thracians to be exact. Stockbreeders at the time would put sheep’s milk in lambskin bags around their waists during their journeys, for reasons. The very word ‘yogurt’ is thought to derive from the Thracian words for ‘thick’ and ‘milk’, a fact that I can neither deny nor prove but am going to go along with nevertheless, mostly because it adds weight to the credibility of Bulgarian yoghurt.

The first noticeable evidence of the healing properties of the yogurt was seen in the grand recovery of King Francis I of France. Stricken with nasty tummy bugs, Frank called a Jewish doctor from Constantinople to see what could be done. The doctor fed him fermented milk-turned-yogurt, and voila, all was right with the King’s guts.

This fine Bulgarian yogurt can help treat various conditions, among them tuberculosis, ulcers, fatigue, stomach problems and even some gynaecological issues. It reduces cholesterol, increases calcium and also produces cancer-suppressing compounds. I’m not a scientist (I’m barely a writer), but this lengthy list of vitamins ascribed to Bulgarian yogurt surely means it’s not bad for you. Here we go: B1, B2, C, A, D, E, PP and B12. Most people are only really aware of vitamins A-D, and even then because of Ribena. It would seem this yogurt is better for you than Ribena.

Back to Grigorov. He published his thesis, snappily titled ‘Contribution to the Pathogenesis of Appendicitus’ and soon received the title ‘Doctor of Medical Sciences – Bacteriology – Internal and Thoracic Diseases’. Massol wrote to Mechnikov telling him of his student and his student’s groundbreaking discovery, and Grigorov soon became a microbiologist in demand. He lectured briefly in Paris, and was offered Massol’s post in Geneva when the great man called it a day, but Grigorov declined the position, preferring to dedicate his work and life to his homeland. He headed back to Bulgaria, where he became a district physician and the manager of the hospital in the city of Tran, just 15km from the border with Serbia. Sure, he lacked lab equipment that wasn’t terrible, but his chunky brain led to various other discoveries. He also pinpointed two other bacteria, Streptobacillus and Streptoccus thermophiles, and he also discovered the first vaccine against tuberculosis.

Stamen also performed the duties of a military front doctor in a number of wars, namely the Balkan War and World War One. During these conflicts Grigorov fought the arguably more intimidating foe called ‘cholera’ and was rewarded with a variety of medals as a result. Grigorov died at the disappointing age of 67 on October 27, 1945, as World War Two finally decided that everyone had suffered enough and left the planet in peace. More importantly, he died on his birthday, putting him in league with Ingrid Bergman and William Shakespeare. Fine company, anyone would agree. I’m sure both Bergman and Shakespeare enjoyed the healing benefits of fine Bulgarian yogurt, except Shakespeare of course because he’s from the long long ago.

‘An Illustrated History of Slavic Misery’ is available for purchase, we swear. To pick up a print copy of the book (€20 plus postage), send us an email at miseryslavic@gmail.com. The digital version is available on Amazon at the link linked here , although you can also buy the digital copy through us. That is unless you think Amazon deserves 30% of the work. 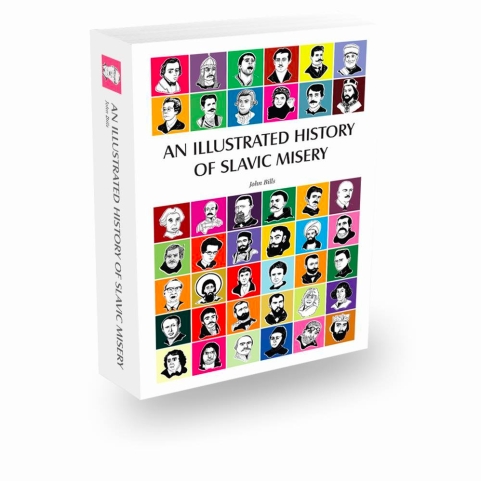